Optical thin films are formed on the substrate by solid-liquid-gas-solid or solid-gas-solid transformation of bulk materials, so their microstructure, crystal structure and film composition are different from the original bulk materials.

Most metals are almost evaporated in the form of atoms, but for some semiconductors and semi metals, they mostly escape as two or more atomic aggregates. Because the four atoms of sb are almost combined by the similar covalent bond, the sb film mainly contains Sb4, and mixed with SB2 and a small amount of sb. As is mainly AS4 and as2, Bi and te contain a considerable amount of Bi2 and TE2, and similar aggregates are observed in C, CE, Se and Si. 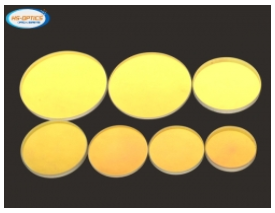 The case of compounds is more complicated. For chalcogenides, the material decomposes during evaporation, for example, 2zns → 2Zn + S2. However, they are recombined on the substrate, so that the stoichiometry of the film is almost the same as that of the bulk material. CdTe is also decomposed into CD and TE2. Similarly, fluoride can also cause defluorination in different degrees, and the moisture absorption ability of the film after defluorination is improved. This defluoridation phenomenon is closely related to the evaporation source, and a large capacity radiation evaporation source can be used to obtain a film which is approximately consistent with the stoichiometry of the block. When the oxide is evaporated, the decomposed O2 can be observed. Even the stable SiO2 also contains SiO and O2. The serious oxygen loss is TiO2, Ta2O5 and NiO. In contrast, MgO, Al2O3, BeO and coo2 are almost similar to bulk materials.

There are different uniformity requirements for different films.

For single-layer MgF2 antireflection film, if the film thickness is λ 0 / 4 (λ 0 = 520nm), the uniformity error should not exceed 40nm, otherwise different colors will appear on the same substrate. The strict requirement is that the peak wavelength variation on the whole filter surface caused by the uniformity error of narrow-band filter should not be greater than 0.3 times of the half width. For a filter with a diameter of no more than 50 mm and a half width of no less than 20 nm in the visible region, this requirement is not too high, but for a filter with a larger diameter and a narrower half width, the problem is very prominent. The cut-off filter with high cut-off gradient is also the same. Poor uniformity will lead to serious deterioration of transition.