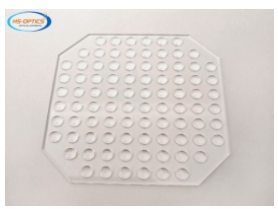 In general, the film preparation process determines that the films have columnar microstructure, which makes certain gaps in the films and causes the instability of optical and mechanical properties of thin film devices. Therefore, various environmental tests must be carried out for some films used in special environments.

1. Constant temperature and humidity test. It is a routine environmental test. Generally, it is stored for 6-24 hours in the environment with relative humidity of 95% and temperature of 55 ℃; Or store under 40 ℃ for 10 days; Or conduct multiple cycle tests at room temperature to 80 ℃, and then detect the changes of mechanical and optical properties of the film before and after the test. For example, for narrow-band filters with high requirements, constant temperature and humidity test shall be carried out, and then the position change and peak size change of transmittance peak shall be tested.

2. Liquid etching. Generally, the film sample is immersed in a solution containing 45g salt per liter at room temperature, or in a diluted acid or alkali solution for 6-24 hours according to the user's requirements. After the test, the optical and mechanical properties of the film are tested and compared with the values measured before the test.